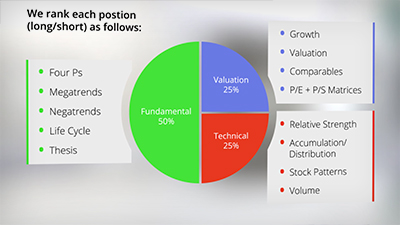 The stock market declined last month, influenced by a swooning Chinese market and a sinking Greek financial system, which will likely be going back to its Drachma currency.

Just as analysts were saying the IPO Market had cooled, June was very active with 25 new offerings and with strong aftermarket performance at +24%, on average. Last month’s IPO star was Fitbit which priced above its upward revised range and traded up 50% on its first day. We initiated a 2% position in Fitbit—which makes fitness tracking devices and grew revenue by 209% in Q1. With a positive 27% operating margin and pricing its IPO at 4.2x P/S, Fitbit is one of the most robust IPO companies we have seen in a while. In our fund, FIT shares had the best ROI in June, finishing up 26%.

Chinese growth stocks pulled back, driven by a broader decline in the Chinese stock market. The Shanghai Composite Exchange finished the month down 9%, which also resulted in several of our Chinese longs to finish in the red. Classifieds leader 58.com was down 15%, China’s Tinder, Momo, finished down 11%, and flash sales e-commerce leader Vipshop ended negative 8%.

Our shorts performed in our favor, with 75% of all shorts finishing the month in the red. We added a new short position in Keurig Green Mountain. We believe that Keurig is falling behind and will continue to lose customers and market share against its major competitors—Starbucks and Nestle‘s Nespresso. Nespresso, specifically, has been pushing into the U.S. market lately and is directly competing against Keurig and its K-Cups business. Keurig’s fundamentals are deteriorating, as evidenced by the -22% drop in brewer volume in Q1 and the decelerating growth in K-Cup volume, going from 28% in Q3 last year, to 14% in Q1 this year.

From a macro perspective, the fund’s long portion has a 34% median EPS growth on a forward basis and a median forward P/E of 29x, or a 0.9x P/E to Growth ratio (P/E/G). This compares to the S&P 500’s 5% forward EPS growth rate and 18x forward P/E, or a 3.5x P/E/G. We are focused on keeping the median P/E low and the growth rate up, while investing in the leading growth companies.

We continue to be bullish on the outlook for growth stocks and see the price action of many leaders, such as Facebook for example, to be encouraging. While it’s good to question the rapid rise of any high flying stock, we think the Fitbit IPO example is a really compelling growth case.

We’ve included our June recap for the Fund here. If you would like more information, or are interested in becoming an investor in the Fund, please let us know. Thank you for your continued interest, and for those who are partners, for your confidence. We are working very hard to earn your continued support.

*AlwaysOn X, also known as AO X, is a model long only paper portfolio constructed and published weekly on A 2 Apple and aonetwork.com by Michael Moe and Luben Pampoulov, the portfolio managers of the GSV X Fund. AO X commenced on 1/5/2009 and its returns are used above through 9/14/2010, when the GSV X Fund commenced. The returns of AO X have been adjusted to reflect the deduction of a 2% management fee and 20% performance fee. Please see important disclosures concerning the limitations of model returns and certain differences in strategy between AO X and GSV X on the last page of this report.

**The returns for the S&P 500 shown above represent returns excluding dividend income. The recent annual dividend yield of the S&P 500 is approximately 2%.

GSV Asset Management, LLC (“GSV AM”) is an independent investment management firm registered with the U.S. Securities and Exchange Commission. The information presented above is for discussion purposes only. It is not a private placement memorandum (PPM) and should not be construed as an offer to sell or a solicitation of an offer to purchase any security. Investment in a hedge fund may entail considerable risk and an investor should have the financial resources to withstand a substantial or complete loss of his or her investment. An investor will need to consider the risks described in the PPM carefully before investing. Past performance is not a guarantee of future results. GSV AM reserves the right to amend or change the data in this material at any time without notice to you. Performance numbers presented here may be unaudited, preliminary and based on estimates. Final and audited performance figures may vary considerably from these estimates. Certain other projections or estimates expressed herein are those of third-party market observers and should not be construed as being factual or absolute statements.

AlwaysOn X (a/k/a AO X) is a hypothetical model portfolio which GSV AM has maintained since January 5, 2009, making hypothetical investments in long-only positions within the same sectors in which the GSV X Fund LP has been active since its inception on September 15, 2010. Unlike the GSV X Fund AlwaysOn X did not contain any short positions. If short positions had been included in AlwaysOn X during the period 1/5/2009 to 9/14/2010, the returns may have been materially different. All returns of AlwaysOn X have been calculated net of a 2% management fee and 20% incentive fee, as are borne by investors in the GSV X Fund LP. Because AlwaysOn X is a model portfolio, it does not incur administrative, audit, custody or transaction expenses; therefore, such expenses have not been considered in calculating the portfolio’s returns. Nor have dividends from AlwaysOnX holdings been treated as being reinvested in the portfolio for purposes of these calculations. Model performance does not reflect the result of actual trading and, accordingly, is subject to inherent limitations, including the fact that results may not accurately reflect the impact that material economic and/or market factors may have had, throughout the pertinent time period, on the adviser’s decision-making if the firm had instead been managing an actual client portfolio.

The S&P 500 index focuses on the large-cap sector of the equity market and companies in the S&P 500 are considered leading companies in leading industries. Unlike the GSV X Fund, constituents of the S&P 500 must be U.S. companies and have adequate liquidity. The HFRX Equity index is constructed and maintained by Hedge Fund Research Inc. The hedge fund strategies in the index maintain positions both long and short in primarily equity and equity derivative securities. A wide variety of investment processes can be employed to arrive at an investment decision, including both quantitative and fundamental techniques; strategies can be broadly diversified or narrowly focused on specific sectors and can range broadly in terms of levels of net exposure, leverage employed, holding period, concentrations of market capitalizations and valuation ranges of typical portfolios. GSV X Fund betas shown herein are calculated versus the S&P 500.

This information is for educational and discussion purposes only. GSV Asset Management, LLC (“GSV AM”) reserves the right to amend or change the data in this material at any time without notice to you.

This information should not be construed as an offer to sell any security. It is neither a prospectus nor an advertisement and no offer is being made to the public.

The information presented in this material was gathered from sources believed to be reliable, however, its accuracy cannot be guaranteed. Any projections, estimates or opinions expressed herein are those of GSV AM and should not be construed as fact or absolute statements. Furthermore, they are subject to change without notice to you.

Performance numbers presented here may be unaudited, preliminary and based on estimates. Final and audited performance figures may vary considerably from these estimates. Individual performance may vary based on a number of factors, including the timing of the investment.

Certain statements contained in this material are forward-looking statements that should not be relied upon as a representation of future performance of any GSV AM fund. There can be no guarantee that investment objectives will be obtained. An investment in a GSV AM fund is speculative and involves a high degree of risk. An investor can lose some or all of his or her investment. Past performance is not indicative of future results.

GSV AM claims compliance with the CFA Institute Asset Manager Code of Professional Conduct. This claim has not been verified by CFA Institute.

No representation or warranty, express or implied, is given to the accuracy or completeness of this material by GSV AM, its general partners, advisory board members, affiliates or employees and no liability is accepted by such persons.